The Mercedes-Benz Sprinter has given its name to an entire vehicle class and is synonymous around the world with large vans with a permissible gross vehicle weight of up to 5.0 tons. It has always been the leader in its class in terms of innovation, and the new Sprinter is again setting the benchmark and demonstrating this to impressive effect, with five new safety systems as well as a range of powerful engines to meet Middle East customers’ requirements. But it’s not all about performance – the new Sprinter presents a striking and dynamic new look.

Traditionally the Sprinter has been the pioneer for driver assistance and safety systems. An Adaptive ESP System, ABS and a driver airbag is on board of every Sprinter for years by now. In the new Sprinter, five additional assistance systems – including some world premieres in the van segment – are helping to further reduce the number of accidents. Celebrating their world premiere in the Sprinter are the Crosswind Assist as well as the optional Collision Prevention Assist. Also new are the Blind Spot, Lane Keeping and High Beam Assist.

Crosswind Assist as a feature of the Electronic Stability Program will form part of the standard equipment for all panel vans and crew buses. The other assistance systems can be ordered as individual extras or logically compiled packages. Each buyer can individually tailor their Sprinter to the respective application.

The developers at Mercedes-Benz are convinced that the use of electronic aids in the van segment will have an extremely positive impact on accident statistics which is particularly important when transporting up to 22 passengers in the new Sprinter Mini Buses. 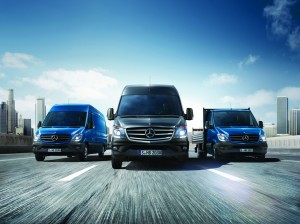 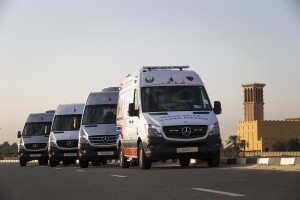 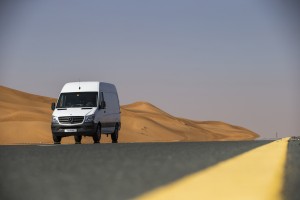